A horrifying tale made headlines this week after three women, held captive for decades, were abruptly freed in an escape aided by a neighbor. What we know about the event is that a concerned neighbor, hearing the cries of one young woman and suspecting domestic abuse, kicked in a door to free her. Her subsequent 9-1-1 call and rescue of her and her companions by police made national headlines. The story is still unfolding. The man, Charles Ramsey, is a colorful personality who seems to have a knack for creative sound bytes in news interviews. Even fast-food chain McDonald’s, prominently mentioned as the food of choice by the local hero, restrained itself in turning it into a publicity opportunity–likely out of respect for the families and their privacy. Internet sensations like these seem to pop up regularly and oftentimes a company must decide whether to jump on the publicity bandwagon or to pass up the opportunity in the interest of courtesy or human dignity. As we watch this play out in national media, let’s see who takes the high road. 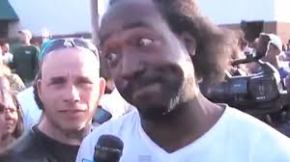 P.S. In a recent update, McDonald’s confirmed it will offer him free burgers for a year. (Sensitively handled very well by their PR team.)